Responsible for this content
Lutherweg - Thüringer Tourismus GmbH Verified partner  Explorers Choice
Over the peaks of the Thuringian Forest and along the Luther Trail passing various historical places on the way to Bavaria.
moderate
20.4 km
8:00 h
532 m
765 m
When Leipzig was elevated to a trade fair town, the trade route running through Gräfenthal to Nuremberg became even more important and ensured that the residents of the town had a stable income by providing outspan services. Multiple guesthouses were built to provide travellers with accommodation either before or after crossing the Rennsteig region. On his journeys to south Germany, Martin Luther often took advantage of such accommodation. When he was on the way to Augsburg to meet with Cardinal Cajetan, Luther stayed in Gräfenthal for the first time from 1–2 October 1518. On the way back he stopped again for the night from 26–27 October 1518.

The journey of the Electoral Saxonian Delegation to the Diet of Augsburg in 1530 led Martin Luther – who only went as far as Coburg for safety reasons – staying again at Gräfenthal. Led by Prince Elector John, the large party didn’t stay in a guesthouse but at Wespenstein Castle, which rises high above the town. On 14 April, Martin Luther preached at the castle church and the next day at St Mary’s Church. Sebastian von Pappenheim, who was living at Wespenstein Castle at the time, began converting the castle belonging to the noble family of Orlamünde into a Renaissance residence in 1517. This meant that in 1530 he was able to accommodate his feudal lord Prince Elector John the Steadfast and his party, including Luther. Pappenheim was an advocate of the Reformation.

At the time of the Reformation, the Amt Lauenstein was held by the Margrave of Brandenburg-Bayreuth. At the Diet of Worms Luther was convicted as a heretic, and the Emperor imposed an imperial ban on him. On the return journey he was kidnapped on behalf of the Prince Elector Frederick of Saxony and taken into protective custody at Wartburg Castle. Three electoral counsels were involved in planning the kidnapping: Georg Spalatin from Spalt, Philipp von Feilitzsch and Friedrich von Thüna, whose ancestral home was Lauenstein Castle in Upper Franconia. In 1525, the lords of Lauenstein converted to Protestantism. Approximately two kilometres south of the modern Luther Trail three coat-of-arms stones from Luther’s time can be seen marking the Bavarian-Thuringian border near Ludwigsstadt.

Today Lauenstein is the name of a well-known confectionery maker. The glass-plated factory provides an exclusive glimpse of the skill involved in creating chocolates and pralines. The parish Church of St Michael in Ludwigsstadt and the baroque-style pulpit and altar with its over-dimensional wooden figures of St Peter and St Paul is well worth a visit. The historico-cultural gravestones of Otto X von Orlamünde and Christoph von Thüna the Elder can be seen on the south of the nave.

Every two years in July a festival takes place at Lauenstein Castle. The next one is in 2017.

all notes on protected areas

Take the 706 bus to Spechtsbrunn from Sonneberg. TIMETABLE

Ludwigsstadt is linked to the Deutsche Bahn regional train network.

Coming from the A73, take exit 5 (Eisfeld-Nord) and continue on the B281 towards Neuhaus am Rennweg. Follow the road to 'Bock und Teich' and then turn right onto the L1152 towards Spechtsbrunn.

Please use the parking spaces in the town centre.

Book recommendations for this region:

Recommended maps for this region:

show more
All books and maps

These suggestions were created automatically.

Help others by being the first to add a review. 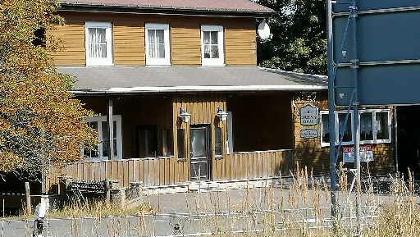 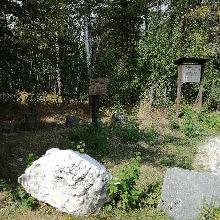 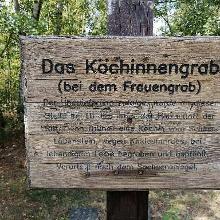 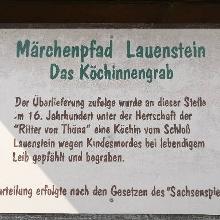