”You have only been really there if going there by foot.” Johann Wolfgang von Goethe

This route passes through an inaccessible area and is therefore closed. Current information

closed
moderate
Distance 19.1 km
Duration7:30 h
Ascent717 m
Descent596 m
Hiking and walking enthusiasts as well as Goethe lovers have taken it on by foot: The Goethe Trail from Ilmenau to Stützerbach. This 20 km trail has to offer not only impressive valleys, gorges and mountain meadows. Above all, you can visit several places closely related to Goethe's work and life. So let's see.

Goethe felt a loving affection towards Ilmenau and its surroundings. Whether the Kickelhahn mountain, the scenic gorge ”Finsteres Loch” or the impressive rock ”Schwalbenstein” – Goethe drew inspiration from them time and again for his poetic works – among them masterpieces of world literature!

He was also enthusiastic as a natural scientist for prehistoric findings near Manebach, which became part of his extensive collection. He attended to the ”intricate” financial system of Ilmenau and the revival of copper and silver mining.

Although the trail is quite demanding and has steep ascents and descents in places, you are rewarded with a grand countryside and stunning views. Also, the trail was awarded the Qualitätsweg Wanderbares Deutschland seal of quality.

Before starting your walk, it's best to treat yourself to an exciting introduction: Apart from the Ilmenau tourist information center, the Amtshaus is also home of the GoetheStadtMuseum. It's about Goethe as an all-rounder: poet, civil servant, natural scientist. Originally, Goethe was appointed Minister for Mining in Ilmenau – in 1784, he did the first groundbreaking for a new shaft. During his stays, he used to live on the first floor, where you can stand on the same knarling deals as Goethe did.

Through the Town to Berggrabenweg

After just a couple of steps through town, at the entrance to the Ilmenau cemetery, there is the grave of Corona Schröter. She was the first actress of Goethe's ”Iphigenia” and a celebrated singer at the Weimar Court. Zechenhaus, Mittlerer and Oberer Berggrabenweg are all relics of the mining era. In Goethe's time, they were water channels, transferring water to the shafts over a distance of more than 14 km.

What an incredible moment this must have been! At Schwalbenstein, Goethe wrote the 4th act of his ”Iphigenia” in only one day. The impressive rock is preserved as a natural monument. On your way to Emmastein, the hut at Marienquelle (Mary's spring) is a good place to rest. In Manebach, the garden of the Kantorhaus (Choiremaster's house) is of interest: Here, Goethe loved to do scientific sketches.

Passing Sophienquelle (Sophia's spring), you reach Großer Hermannstein. Up here, there is good news for you: First, you have managed the steepest climb of the trail. Second, you are rewarded with a real Goethe panoramic view! It is nearly identical with his drawing ”Dampfende Täler” (Steaming Valleys).

You have reached the highest point of the trail – on the Kickelhahn with 861 m! Ilmenau's closest mountain has three attractions to offer: Goethehäuschen (Goethe hut), Kickelhahn Tower and historic hunting facilities.

To honor the incomparable atmosphere of the evening, on September 6th, 1780, Goethe wrote one of his finest and most famous poems! But not on a sheet of paper, but on the inside of the then hunting cabin. The original script is preserved as a historic photography – a facsimile is on display in Ilmenau's GoetheStadtMuseum.

Over all of the hills

The birds make no sound on the bough.

Wait a while, Soon now

Peace comes to you.

Also on Kickelhahn, you find the remains of a former hunting facility of the earlier Dukes of Saxe-Weimar, including a wooden reconstruction of a roofed stand for the stately hunters. Plus: The view is just legendary! The Thuringian Forest, its outland, even the Harz mountains are in good weather visible from up here.

The Museum Jagdhaus Gabelbach invites the guest on an interesting stay: Formerly used as a guest house for the hunting parties of Duke Carl August of Saxe-Weimar-Eisenach, it today displays details about the hunting habits and the social life at the Weimar Court as well as about Goethe's natural-scientist studies.

This part of the trail takes you to admire numerous natural beauties! The river Schorte purls through the picturesque valley leading to Knöpfelstaler Teich, a beautiful pond in the forest. Here, you are in the middle of the UNESCO Biosphere Reservation Thüringer Wald! The path leads us on to Finsteres Loch, a shady gorge with a waterfall.

Before reaching Stützerbach, the historic Auerhahn inn invites to take a break. The name reminds of  the capercaillie, which used to be native to the forests around here. From this guesthouse, you walk downhill with a good view on Stützerbach and its Schlossberg. From 1776, Johann Wolfgang Goethe has come to Stützerbach 13 times, then living in today's museum: Its main attraction is Goethe's original study and living room.

If you are not afraid of the short climb, you can tackle the 3 km to Rennsteig station in a southerly direction from Stützerbach.

Sturdy shoes and a reserve of drinks are recommended.

all notes on protected areas

Book recommendation by the author

Book recommendations for this region:

Recommended maps for this region:

These suggestions were created automatically.

Would you like to the ask the author a question? 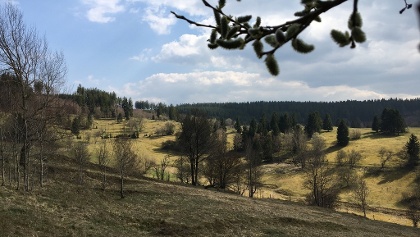 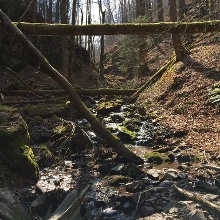 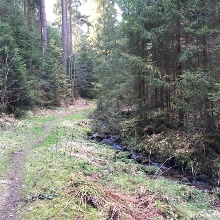 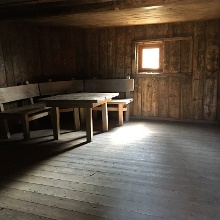